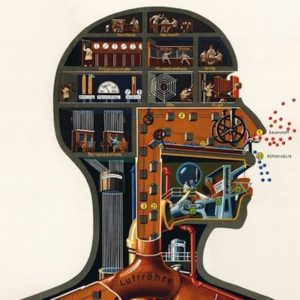 Homo Machina is an authentic video game creation, based on Dr. Fritz Kahn’s (1888-1968) work, a German physician who created innovative illustrations in order to make biological sciences understandable and accessible to a larger audience.

The 2D exploration game Homo Machina offers to the young and the not-so-young a funny journey through the human body which becomes a gigantic mechanized factory, filled with tiny workers who are controlling every function of the human anatomy. By adapting Fritz Kahn’s work into a video game, the aim is to share the idea that science can be fun and raise awareness about that iconic work!

Homo Machina is an adaptation of the famous poster, Der Mensch als Industriepalast, which represents life processes of the human body through familiar industrial mechanisms. In this video game, the player has to run the “human factory”, activate each vital function one by one, and maintain the complex mechanisms functional. He must explore each room, understand how the machinery works and solve puzzles.

Developed for mobile phones (Android and iOS), Homo Machina has been released on the 17th of Mai 2018. It has been coproduced by the french production company Darjeeling, the Franco-German TV network ARTE and the german production company Feierabend!. The project has been partly financed by the CNC and Medienboard Berlin Brandenbourg.

Homo Machina has been supported by the acceleration program SpielFabrique which helps startups and young entrepreneurs working in the video game industry.

They speak about it